Hit enter to search or ESC to close
Blog

Do Tents Attract Lightning? How To Camp Safely in a Thunderstorm?

Do tents attract lighting? The short answer is no. However, the possibilities are increased by a number of factors;

While tents don’t actually attract lightning, tall objects such as trees and dead branches situated around might cause accidents of devastating severity. Also, pitching your tent in a valley or a place that’s likely to flood is another danger you should consider while camping during a thunderstorm.

We are going to look at:

Is camping in a thunderstorm safe? 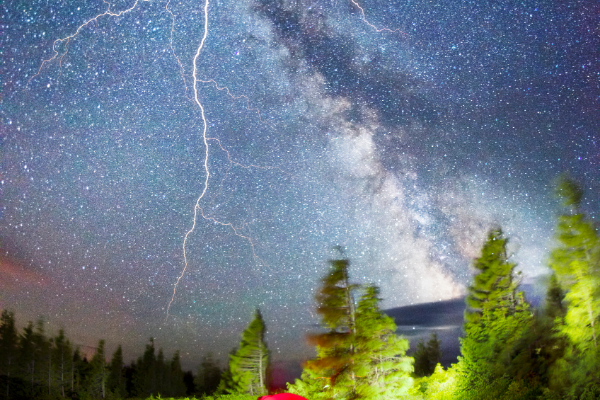 When you put safety conventions to practice, camping in a thunderstorm becomes safer because tents do not actually attract lightning. As such, your tent needs to be located in a slightly sloping terrain to prevent the risk of flooding.

The tent should also be far from tall trees and objects that likely offer easy resistance to the static spark. Setting the tent under dead branches is ill-advised as well since a lightning strike can sever the branch, causing a fall in the tent.

If the branch is big enough, you and your tent are at risk of sustaining deadly injuries.

Similarly, pitching your tent on a sweeping field or area is less recommendable. This is because your tent could be the tallest object around, offering the strike an easier path to follow. Keep these tips in mind to stay safe and enjoy this thunderous spectacle comfortably curdled in your tent.

Have you ever received a mild electric shock while holding a shopping cart or doorknob? Or, noticed your hair ends erecting when a balloon comes in close proximity? These phenomena occur due to the transfer of electrons that result from static electricity.

This type of electricity emerges when two or more charged particles, come into close contact and rub.

For example, when you walk, you scrap electrons off the ground, which builds up over time. The shock you feel whilst touching a doorknob or cart is a result of electron transfer from you to the metal or knob.

The same applies to how a lightning bolt comes forth. The extensively repelling electrons in the clouds seek to follow a path with less resistance to easily find solid ground. Since dry air is less conducive for electron transfer, moist air offers the ideal conditions for electron transfer in air.

When violent downpours and thunderstorms come to life, it becomes easy for repelling electrons to reach the ground, and do so in the form of lightning.

Does lightning always strike the tallest object? Why would your tent be among the targets?

However, other sources beg to differ, fervently arguing that thunder strikes are indiscriminate of targets and hit whichever offers a clear path. Going by these logics, we can only deduce that tall objects are frequently, but not always hit by lightning bolts during a thunderstorm. Your tent is on the target list as well, especially if the location in which it’s pitched is widely exposed.

If you are in the backcountry and want to enjoy what nature has to offer in a humble tent, it’s advisable to pitch far from tall objects and trees as well as in sweeping terrain.

The best action to take is to peg your tent in a low area instead of a ridge top and avoid too deep or steep valleys that are susceptible to floods.

Will my tent poles attract lightning during a thunderstorm? 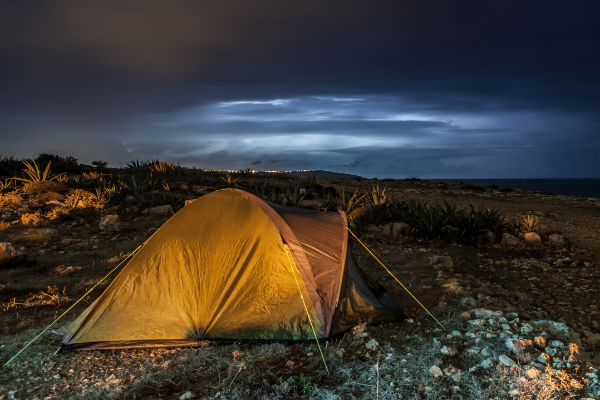 As mentioned earlier, your tent and or metal pole cannot attract lightning. However, the metallic or aluminum poles can facilitate the conduction of electrons and cause ground current injuries.

Therefore, it’s essential to pitch your tent far from ridge tops, where lightning strikes are more prevalent. It’s also because of this that conventional tents are commonly fashioned with carbon fiber or other poor electric conductors.

With this in mind, it would be recommendable to purchase tents with less effective electric conductors. This mitigates the chances of suffering ground current injuries but still stand less effective in averting direct lightning strikes.

Having metal camping gear doesn’t necessarily make your tent attract lightning. If you happen to be pitched on high altitude locations or heavily forested regions, however, the likelihood of a lightning strike is ever-increasing and overhanging. The fabric and shape of the tent play trivial to negligible roles in attracting lightning hits.

If a lightning bolt happens to hit the ground nearby, metal objects can conduct the resultant current. And lead to severe accidents like ground current injuries. So, it’s better to get rid of the metallic objects than to be sorry later. This makes Bell tents less admirable to tents absent metallic poles during thunderstorms.

Can tents offer lightning protection? And do we have lightning-proof tents?

Generally, NO. But there are different ideas and concepts developed recently that seek to address this issue. Purchase of the highly-sought-after tent lightning caps, for instance.

Also, the Bolt Tent, also referred to as the “lightning protective camping tent” because among other features, its diameter poles are made of special materials plus it has a closed construction that acts as a ‘la Faraday cup and also has a copper conductive grid, is another creative concept that’s designed to redirect lightning current to the ground.

Again, the aluminum structures incorporated in the design act as conductors and can withstand up to 200 Kiloamperes of electric current.

How to stay safe while camping in a thunderstorm?

If you are camping in a thunderstorm, there are a few essential tips you should have at your fingertips.

While tents never attract lightning strikes, having tall objects nearby or pitching in high ridge tops poses a greater risk of sustaining lightning-related injuries. Below we briefly look at what you can do if you are afraid of your tent attracting lightning:

#1 Pitch far from tall and under trees

Trees and other tall objects outdoors often offer pathways through which lightning bolts reach the ground. While tall objects and trees aren’t always the primary target, a hit can cause dead branches from trees to fall upon your tent.

This can result in unprecedented accidents or even casualties. As such, it’s advisable to pitch your tent in a securely situated region, instead of under a tree. A more favorable location would be on a flat, low and sloping region that’s clear of tall objects.

Since lightning strikes commonly target tall objects, pitching your tent in open fields is similarly less secure. Metallic tent poles act as electric pathways for the current and can easily destroy your tent. Open fields also have no trees and thus have fewer windbreakers, making thunderstorm winds a real concern.

If the tent isn’t firmly pegged with strong pegs, the wind can easily sweep the tent away. All in all, try pitching your tent somewhere less exposed or prone to flooding.

Although tents can’t attract lightning, setting up camp on high-altitude areas and ridge tops increases the chances of being hit. On the other hand, valleys and deep gorges are frequently flooded during violent downpours and so are of equal peril. The only viable terrains up for grabs are flat and lowly inclined slopes.

However, it’s still important to remember not to settle on open and exposed landscapes. Instead, peg your tent on plateau-like terrains where it’s less likely to flood.

Insulating your tent poles using poor conductors might seem like a brilliant idea at first. But this is the complete opposite. Say, a lightning bolt unfortunately strikes your tent and is conducted through the aluminum connectors only to be halted by the insulators.

If this occurs, there will be an overflow of electric current, which might actually lead to sustained injuries on your part. While tent lightning caps offer a measurable degree of safety, insulated poles on the other hand do not.

Though the prototype design is still in the trial phase, the lightning caps, if they work, will make a huge difference… The race to tent lightning protection is still behind even with such a device, which up till now has only one comment on Amazon.com. So, we wouldn’t readily recommend the use because its efficacy is far from proven, but wouldn’t also brush off the idea of purchasing and examining one.

In short, your tent will not attract lightning. However, pitching the tent near tall objects and in high places amplifies the risk of lightning strikes while camping in a thunderstorm. Still, setting your tent in open areas increases the likelihood of a thunder strike.

While there is no working tent lightning protection currently available, there are many safety precautions you can use to stay safe during a thunderstorm.

We hope we have answered the question, “Do tents attract lighting”? And also offered helpful tips to make your camping in a thunderstorm safer.

We would like to hear your experiences of camping in a thunderstorm and any of the safety measures that you found helpful. Leave us a comment below. Cheers! 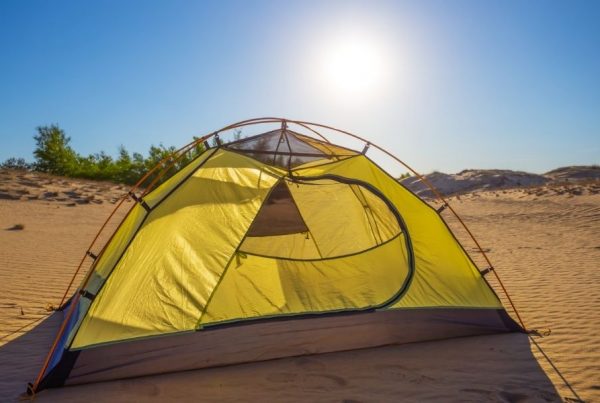 7 Smart Tips on How to Cool A Tent Without Electricity 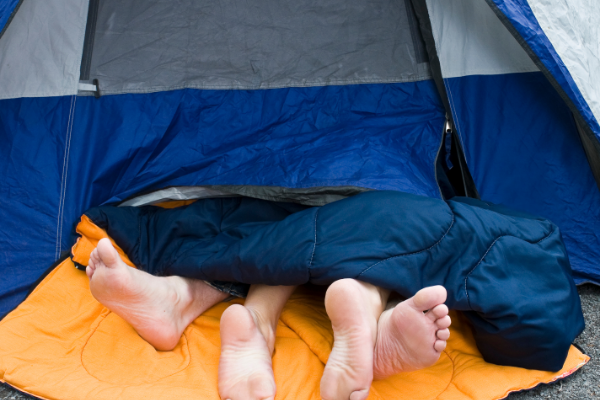 8 Key Tips On How To Clean a Tent That Smells 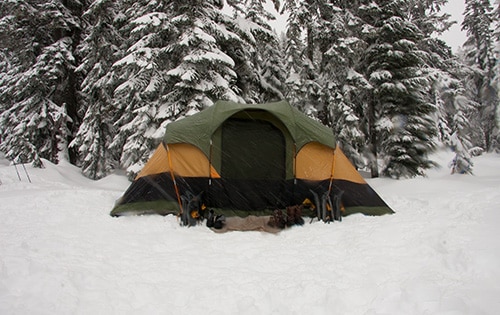 8 Tips On How To Insulate a Tent for Winter Camping

The Outdoor Sports Review is a participant in the Amazon Services LLC Associates Program, an affiliate advertising program designed to provide a means for sites to earn advertising fees by advertising and linking to Amazon.com